The Südsteiermark is a remarkable source for fragrant and refreshing wines, especially Sauvignon Blanc. But its 2,744 hectares under vines allows enough room for an ample assortment of grape varieties, ranging from Welschriesling, Morillon and Gelber Muskateller to Traminer. Here, in one of the most charming viticultural landscapes in all of Europe, growing grapes is hard work, since most of the vineyards are laid out on extremely steep slopes.

The palette of grape varieties in the Südsteiermark is widely diversified, and equally so are the soils of the winegrowing region, ranging from sand and schists to marl and limestone. A moist and warm Mediterranean climate determines the long vegetation cycle, while cool nights promote the development of rich and complex aromaticity, which imparts a wealth of nuance and nobility to the white varieties. This applies both to the lithe and fruit-forward young wines – as “Junker” the harbingers of the new vintage – and the region’s particularly typical white wines, which are released to the market with the protected designation of origin Südsteiermark DAC.

The grape variety Sauvignon Blanc has been able to rise to the top in the course of continuous development, and today Sauvignons from the Südsteiermark belong to the elite class worldwide. About one fifth of the cultivated area in the region is planted to this variety; the regionally typical spectrum ranges from fragrant and refreshing examples to elegant and complex Sauvignons with unmistakable expressions of detailed terroir. So it is no wonder that this variety leads the field of approved DAC grape varieties: together with Welschriesling, Weissburgunder, Morillon (Chardonnay), Grauburgunder, Riesling, Gelber Muskateller and Traminer, the Sauvignon Blanc forms the basis for the Südsteiermark DAC palette. And particularly in the areas around Eichberg, Leutschach and Gamlitz, Gelber Muskateller figures among the star varieties. Riesling is the specialty of Kitzeck in the Sausal, where the steepest (with more than 100% slope) and highest in elevation (up to 600 metres above sea level) vineyards in Steiermark are to be found. Friends of the Pinot family will, among other varieties, be sure to enjoy the opulent Morillons (Chardonnays) from the limestone-rich soils around Ehrenhausen.

The sustainable success of the wines of the Südsteiermark is guaranteed by an extremely open-minded community of winegrowers, who have by-and-large gained experience travelling and performing internships in the international world of fine wine. But the viticultural school in Silberberg also continues to contribute in both theory and practice, equipping young winegrowers with the best qualifications.

Steiermark’s elite wines have meanwhile not only become mainstays on the wine lists of the regional hospitality industry, but are also causing quite a stir internationally. Archduke Johann (1782–1859) – for his time a true pioneer with a “European” vision of wine culture, whose influence is still felt in the region – would today be proud of his winegrowers in the Südsteiermark. 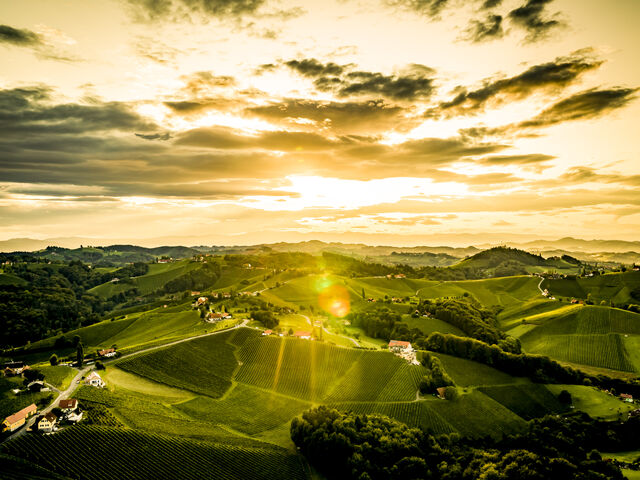 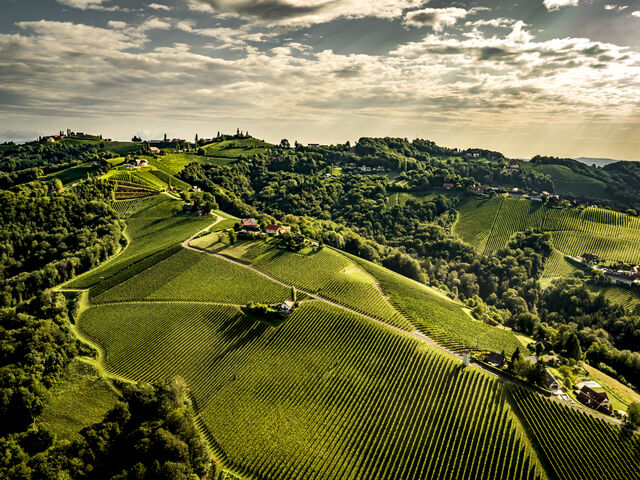 Südsteiermark DAC
(as of the 2018 vintage)

The Sausal and its steeply sloped vineyards are composed of phyllitic clay schists with layers of green schists and quartzites of the Eastern Alps. On the slopes near and north of Silberberg, Nestelberg and Rirpenegg as well, these not-too-hard types of hard rock come to light. On the Grillkogel, limestone and argillaceous/pebbly limestones of remotest geologic antiquity appear as well.

Most of the vineyards in the Südsteiermark grow on coarse-grained, alluvial gravels – some of which have solidified into conglomerates – as well as on the marls, clay deposits and sands of the so-called Styrian Schlier, on conglomerates, gravels of the Kreuzberg formation and on sands and marls of the Weissenegg Formation. The latter units belong to the sediments of the Styrian Basin, deposited into the Paratethys Sea, approximately 15–18 million years old. They are quite variable in grain size and limestone content; pure limestones, similar to Leitha limestone, occur locally between Wildon and Grassnitzberg.

Südsteiermark DAC wines are versatile food companions. This is true for regional specialties in the typical Buschenschank (the local traditional wine tavern), for Styrian fried chicken or the classic Styrian carp with root vegetables and horseradish. Sauvignon Blanc, Welschriesling, Weissburgunder and even Muskateller all match up perfectly with those dishes, while an opulent Morillon is brilliant alongside roasted Sulmtal chicken. But one can also find wines from the Südsteiermark DAC all over the globe, appearing on the wine lists of top restaurants. The great Sauvignons, especially, prove their class in this rarefied environment as accompanists to various styles of cuisine – no matter if fish, vegetables or (in special combinations) even red meat provide the basis.