The Weinviertel is a solid presence in the mind of every Austrian wine lover, but the level of awareness with regard to Austria’s largest winegrowing region is also growing in the international perspective – the region covers an impressive 13,858 hectares and produces a substantial variety of wines. But the primary recipe for success is a grape variety called Grüner Veltliner, especially when expressing its regionally typical characteristics as Weinviertel DAC and Weinviertel DAC Reserve or Grosse Reserve.

Austria’s largest specified winegrowing region (13,858 hectares) extends from the Danube River in the south to the Czech border in the north, from the Manhartsberg in the west to the Slovak border in the east. But the Weinviertel is not a homogeneous area. Due to a combination of various factors – especially with regard to climatic influences and geological conditions – the region can be subdivided into three parts and, in addition to the flagship Grüner Veltliner, there is indeed a handsome fleet of other grape varieties.

In the western Weinviertel, every vinous adventurer should head for two “islands”, starting in the countryside around Retz, with its extensive cellar complexes under the old town, which serve as a vivid reminder of the historical importance of the wine trade there. Here, the dry microclimate has always favoured red wine production. In the Pulkau Valley around the towns of Jetzelsdorf and Haugsdorf and in the broad kettle of Mailberg, fruit-forward Zweigelt and Blauer Portugieser flourish. An anchor point for white wine lovers is provided by another “island”, here formed from granite around Röschitz, where Grüner Veltliner and Riesling develop remarkable finesse thanks to flavour-influencing formations of primordial rock.

Winegrowers in the northeastern part of the Weinviertel around Poysdorf produce spicy Grüner Veltliner for the most part, along with refreshing Welschrieslings and rich Pinot-family whites. The limestone cliffs of Staatz and Falkenstein mark the northern boundary of the Weinviertel, with Moravia, creating excellent conditions for fruit-forward, mineral-toned wines. The villages of Herrnbaumgarten and Schrattenberg, north of Poysdorf, are ideally suited to yielding expressive red wines thanks to their basin-like topography. Just north of Vienna, the winegrowing community of Wolkersdorf is noted for classic Weinviertel DAC , and the region on the slopes of the Bisamberg must be highlighted as the source for savoury Rieslings.

Further to the southeast, on the Marchfeld border between Auersthal and Mannersdorf, the influence of the Pannonian climate zone is clearly noticeable. In conjunction with the microclimate on the March River, the best conditions prevail for often producing somewhat rounder Grüner Veltliner, Rieslings, Pinot-family wines and aromatic types such as Traminer – all the way up to high Prädikat levels.

Despite this diversity, Grüner Veltliner remains the undisputed marquee player in the world of Weinviertel wine: almost 6,700 hectares under vines mean not only half of Austria’s entire stock inventory, but accounts for nearly half worldwide as well. This notwithstanding – and also with all the different types of soil and significant distances between the wine villages – the Weinviertel type of Veltliner can be recognised by a piquant “peppery” note, the so-called “Pfefferl”. Alongside the scents of green and white – and when riper, black – pepper comes a fruit-forward bouquet and fresh acidity. As of the 2002 vintage, this characteristic trio defines the parameters for the regionally typical Weinviertel DAC , the first protected designation of origin in Austria. In addition to the classic and dry, refreshing version, the powerful variant Weinviertel DAC Reserve also became available with the 2009 vintage. The additional designation “Grosse Reserve” can be used if all the conditions for using the additional designation “Reserve” are met and the wine is not submitted for the Federal Inspection Number before 1 November of the year following the harvest. 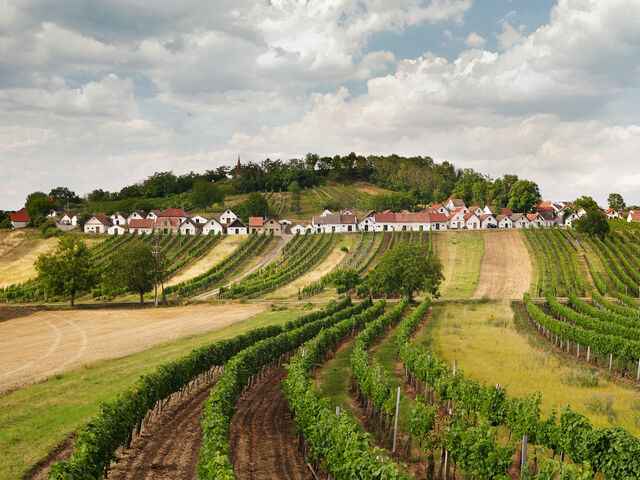 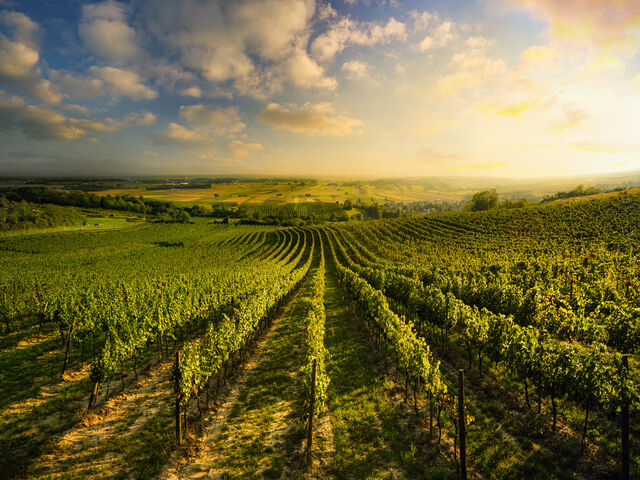 Labelling:The designation “Weinviertel” is also to be mentioned on the label, which does not have to contain all mandatory information (front label, if there is a back label), possibly without the addition “DAC”.

At the edge of the Waldviertel, vines stand on the acidic granite of the Moravicum, which decomposes into quartz-rich sand. To the east one finds two basins of loose rock. They are separated by the ridges of the Leiser Mountains and the Waschberg zone’s striking cliffs of bright, hard limestone. The central part of the Weinviertel also includes flysch with calcareous sandstones and marl on the Bisamberg in the south, with mostly acidic, quartz-rich sandstones and clays on the eastern edge of the Korneuburg Basin.

To the west of the Waschberg zone is the Molasse Basin, with sands, gravel, argillaceous silt and the distinctive feature of diatomaceous earth on the one hand, with the wide gravelly downs of the primordial Danube on the other.

The region to the east of the Waschberg zone is part of the Vienna Basin, also predominantly composed of loose, mostly limestony rocks such as gravel, sand and argillaceous silt. Solid limestones or chalky sandstones only occur locally in both basins.

More than half of the vineyards are growing on loess, the glacial-period rock dust that can blanket all older varieties of rock in different depths and then also provides limestone content on acidic substrata.

The Weinviertel DAC is an ideal wine to serve alongside many dishes from the classic Austrian repertoire – from cold cuts in the wine-tavern to pasta with ham, cheese and onions – and of course with Wiener Schnitzel. It also shines with many bistro classics and dishes with a Mediterranean twist. Reserve wines, on the other hand, will also go perfectly with sophisticated and creative dishes, as well as spicy recipes from the Asian cookbook.