Austria’s winegrowing region Neusiedlersee, situated to the east of Lake Neusiedl, reaches from the hills and the big wine town of Gols over the flat Heideboden down to the melancholy Seewinkel. A great wealth of grape varieties ripen here on the banks of the shallow steppe lake, on 6,239 hectares of vineyards. Since 2012, Neusiedlersee DAC has stood for fruit-forward and harmonious red wines vinified from the variety Zweigelt, which are moulded by the climate and the soil, with the supplementary designation “Reserve”.

The Neusiedlersee DAC region comprises the political district of Neusiedl am See, with the exception of the municipalities Winden and Jois. It extends from the north side to the east bank of Lake Neusiedl and has a vineyard area of 6,239 ha, of which 1,501 ha are planted with Austria's most widespread red wine variety Zweigelt. With this, it is the most expansive area with wines of protected origin in Burgenland. The terroir is characterised by sandy, loamy soils with variable admixtures of gravel. There are also limestone-rich gravel soils, as well as limestone-poor pure gravel soils, ranging across the spectrum to salty and light, sandy soils.

The winegrowing region sits right in the heart of the Pannonian climate zone, characterised by hot, dry summers with moderate rainfall and cold winters with little snow. An important influence upon microclimate is exerted by Lake Neusiedl, the largest steppe lake in Central Europe. In summer, the large water surface heats up and then slowly releases the stored warmth into the surroundings at night. The slight nocturnal reduction in temperature promotes the development of cool fruit and maintains the necessary acidity that distinguishes the wines.

Dry Neusiedlersee DAC is a fruity-spicy, harmonious Zweigelt, with a typical scent of blackheart cherry finely underscored by dark berry fruit and subtle herbal notes. The nicely balanced body is supported by fine and soft tannins. Red Neusiedlersee DAC Reserve wines are multi-layered and complex, powerful Zweigelt showing a clear aromatic spectrum ranging from black cherry to blackberry to elderberry; the fruit is complemented by notes of spices and subtle mineral tones. In combination with the finely grained tannin, this gives the wine a closely-woven structure and juiciness on the palate. These wines are only released to the market after a maturation period of more than a year, and offer great cellaring potential.

The region’s world-famous Prädikatsweine also belong to the regionally typical DAC wines: Spätlese and Auslese wines on the Neusiedlersee DAC level as well as Beerenauslese and Trockenbeerenauslese as Neusiedlersee DAC Reserve are a delight for friends of sweet wines. The high humidity and foggy conditions in autumn favour the onset of the desirable “noble rot” (Botrytis cinerea) as a basis for nobly sweet Neusiedlersee DAC Reserve, particularly in vineyards between the numerous small brackish lakes called “Zicklacken” in the southern subregion Seewinkel – especially from the variety Welschriesling. These extremely special wines have made a significant contribution to making the Seewinkel – still relatively new compared to traditional Austrian winegrowing regions – known throughout the world.

Red wines of international format – vinified from other varieties such as Blaufränkisch, Sankt Laurent or Pinot Noir – are released to the market with the designation of origin “Burgenland”: styled to accentuate depth of fruit or matured in wooden casks, either monovarietal or as a cuvée. Likewise, well-balanced white wines with attractive body are also marketed with this designation of origin: in addition to the leading white variety Welschriesling, Weissburgunder and Chardonnay are above all very popular, as are the aromatic varieties.

As a complement to the wine and fine dining programmes that cater to the region’s guests, bicycle tours, equestrian excursions and water sports are offered. Plus, the selection of guest accommodations in every category from simple to elegant leaves nothing to be desired. From Neusiedl and Gols on the north bank via Podersdorf, Illmitz, Apetlon and Pamhagen in the south to Andau, Frauenkirchen or Mönchhof in the east of the region, Schloss Halbturn sets the tone for cultural highlights with exhibitions and concerts all year round. 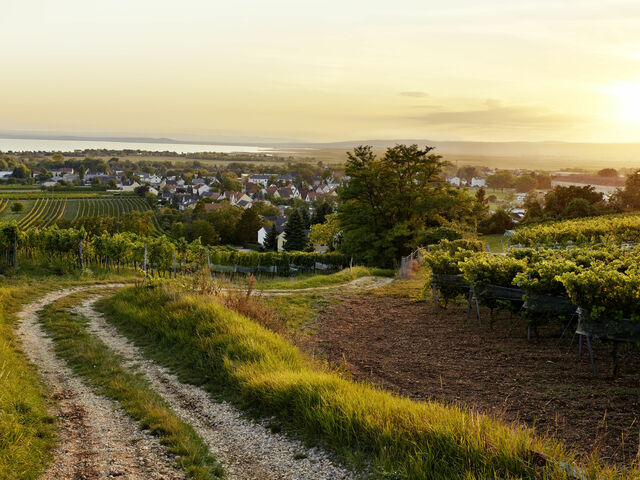 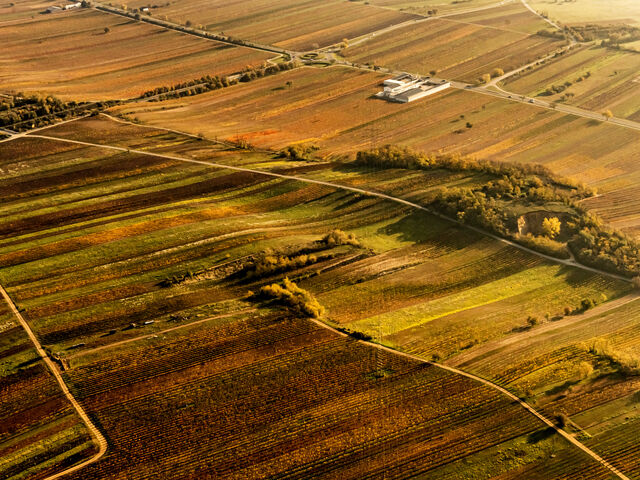 Neusiedlersee DAC
(AS OF THE 2011 VINTAGE)

Regional delineation: Comprises the political district Neusiedl am See except for the municipalities Winden and Jois.

Labelling: Designation of origin (incl. DAC) most be shown on the front label, if there is no back label available. The smaller designation of origin "Seewinkel" for nobly sweet Neusiedlersee DAC Reserve is allowed, if the grapes come from the municipalities Apetlon, Illmitz and/or Podersdorf.

The winegrowing region of Neusiedlersee is characterized by the nearly flat gravel plains of Seewinkel and the Parndorfer Plateau. The  Parndorfer  Plateau  is  formed  from  several  levels  of  Pleistocene in age valley floors of the Danube that deepen and young to the  southeast.  The  gravels  are  silty-sandy,  quartz-rich,  bear  little  carbonate (limestone, dolomite) and are always overlain by loam. The basement of the gravel consists of fine-grained, partly calcareous-dolomitic, silty-clayey, sometimes sandy sediments from Lake Pannon. These vineyards are sited on northwest to southeast facing slopes from the plateau to the lake. The Seewinkel gravels are also  quartz-rich,  but  have  a  significant  proportion  of  carbonates  (limestone, dolomite), are only slightly weathered and are only locally overlain by fine-grained, mostly calcareous sediments.

With their depth of fruit, these wines go perfectly with classic Pannonian cuisine, such as roasted cuts of beef, or the traditional St Martin’s Day goose. Reserve wines can also be effectively combined with braised game dishes or assertive beef preparations. Due to their exquisite balance, Neusiedlersee DAC wines acquit themselves just as handsomely alongside international dishes.