1,901 hectares of vines come right up to the hillsides of the Vienna Woods, running from the city limits of Vienna along a chain of hills with Mount Anninger as the highest point until arriving south of Baden. White wine remains the focus even today in the northern part around Gumpoldskirchen, with special attention paid to the autochthonous varieties Zierfandler (also known as Spätrot) and Rotgipfler, while in the south red wine dominates with the varieties Sankt Laurent and Pinot Noir.

Grapevines were already being cultivated more than 2000 years ago in this climatically favoured region south of Vienna. Roman legionnaires stationed in Carnuntum and Vindobona introduced vines from their homeland and brought the technical expertise of wine production to Pannonia. The name Thermenregion refers to the sulphurous hot springs of Aquae (Baden). In the Middle Ages, viticulture experienced a veritable heyday here under the guidance of the Cistercian monks. The arrangement of the vineyards clearly shows the influence of their Burgundian mother-monastery Citeaux, as does the character of the villages themselves.

Cistercian winegrowing experts immediately recognised the value of this extraordinary terroir. The vines benefit here from the Pannonian climate with hot summers and dry autumns as well as the1800 annual hours of sunshine. Constant air currents enable the grapes to dry quickly after dew or rainfall in autumn.

Nature and culture collaborate to enable a varied and rich leisure and recreation program: from a visit to Freigut Thallern – belonging to the Cistercian Abbey Heiligenkreuz, one of the oldest wine estates in Austria – to the cultural centre and spa-town Baden with theatre, operetta and wellness. Excursions along the wine trail invite visitors to the region’s many cosy wine taverns or hikes through the vineyards along the Vienna Spring Water Main. 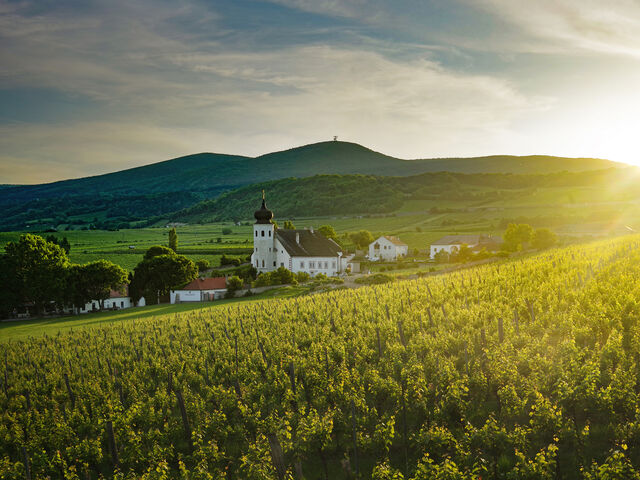 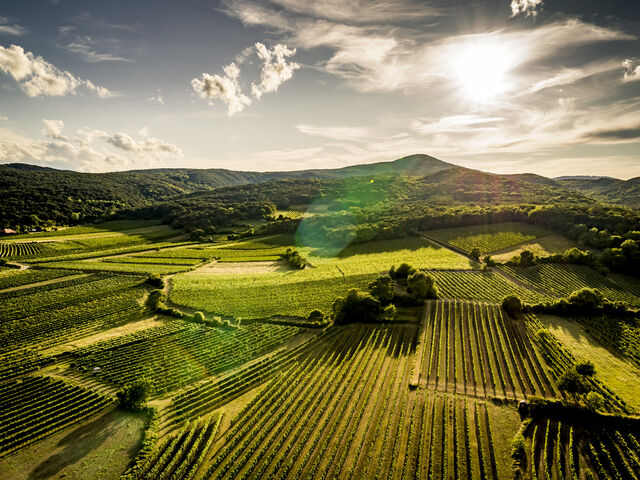 The winegrowing region Thermenregion extends on the eastern edge of the Limestone Alps to the Vienna Basin. However, only a small part of the vineyards lies directly on solid limestone and dolomite rock or on the sandstones and conglomerates of the Gosau Group. Most of the vines are planted upon deposits from the primordial sea and Lake Pannon in the Vienna Basin or on alluvial gravel from the glacial periods in the Steinfeld plain.

At the edge of the basin one finds mostly sand, gravel, sandstones, conglomerates and breccias, which are composed of rock material from the Limestone Alps and flysch, brought here by rivers from the nascent Alpine Range. They house famous sites of fossils, such as the Gainfarner sands. There, along with shells, snails and corals, an entire manatee skeleton some 14 million years old was found. Toward the basin, vineyards often stand on fine-grained clays, marls, debris or colluvium, upon which loamy soils, quite often with high limestone content develop.

In the far southeast, some vineyards on the other side of the Vienna Basin grow on crystalline slates and carbonates of the Eastern Alpine unit, which rises here in the Rosalia Range.

Wines from the Thermenregion are considered to be excellent food companions. As unique soloists as they might be, Rotgipfler, Zierfandler and the white Pinot varieties – as well as Pinot Noir and Sankt Laurent – place themselves entirely in the service of the respective dish when appropriately used in the culinary ensemble. For example, many preparations of asparagus, because of their fine bitter notes, demand white wines such as those from the Thermenregion with ripe acidity and medium body. Hearty Austrian classics such as Wiener Schnitzel or “Beuscherl”, as well as Eastern delicacies such as tandoori chicken or glazed pork belly receive the finishing touch from these wines, while Pinot Noir and Sankt Laurent play all the right cards with marvellously tender beef or dark-meat poultry – like St Martin’s goose or Peking duck.