Named for the river Kamp that runs through it, its leading municipality is Langenlois, Austria’s largest wine town – and with 3,907 hectares under vines and numerous internationally known top estates, the Kamptal is one of the most successful winegrowing regions in the country. Culture and tourism also enjoy particular prominence here in the region. Since 2008, the name Kamptal DAC stands for Grüner Veltliner or Riesling, either in the classic-to-middleweight styles, or as a robust dry Reserve-category wine.

The Kamp is a river, some 150km long, which flows north to south and issues slightly east of Krems into the Danube. In the Kamptal – the Kamp river valley – one finds various rock formations, ranging from loess and gravel to striking crystal intrusions to red, feldspar-rich sandstones and conglomerates on the famous Heiligenstein. These four types of rock form the basis for a colourful geological patchwork that unfolds throughout the region, testifying to ancient seas and fiery volcanoes, primordial realignment of riverbeds and dust blown in during the ice ages. So it comes as little surprise that the wines from the Kamptal – characterised by differences in exposition, elevation and soil – exhibit very distinctive and individualistic character. One particularly special feature is the 270 million-year-old Permian desert sandstone with volcanic elements on the Heiligenstein. And although “heilig” might mean “holy” in German, the name actually refers to the “hellish” sunshine, which makes for a hot, dry microclimate.

On the steep terraces that crowd the southern slope of the hillside – so steep that no permanent covering of loess could remain – it is mainly Riesling vines that root deeply, producing powerful, mineral-driven and (above all) extremely long-lived wines. Toward the Danube, the soil formations of the vineyards changes; here, refreshing and classic but also very robust wines from Grüner Veltliner find ideal conditions on the broad loess and loam terraces. The classic Kamptal DAC on the Gebietswein and Ortswein levels manifests itself in both Grüner Veltliner and Riesling as a fresh, dry white wine with personality; pleasantly light on its feet and yet exhibiting concentrated structure. The great robust Riedenweine and Reserve wines are, with their rich character and appreciable depth, are unmistakable expressions of their origins. In addition, white and red wines of the Pinot family as well as the Blauer Zweigelt show their finer aspects here, marketed under the designation “Niederösterreich”.

In terms of climate, the dynamic tension that arises in the Kamptal between the hot, Pannonian basin in the east and the cool Waldviertel to the northwest is quite noticeable, and this fresh breath can also be felt in the wines. Interplay between the heat of the day and the substantially lower nighttime temperatures imparts great aromatic finesse and lively acidity to the grapes.

Here as well, a wine museum known as the Loisium has become a popular, unique and distinctive attraction for wine tourists. Above ground it offers a futuristic visitor centre together with a vinotheque featuring regional wines, while underground a mystically-staged wine experience with light and sound follows along centuries-old pathways. In addition to the town of Langenlois with its associated municipalities of Schiltern, Gobelsburg, Haindorf and Zöbing, and the important viticultural community Strass im Strassertal, there are numerous smaller wine villages such as Etsdorf, Hadersdorf, Kammern, Lengenfeld and Schönberg. 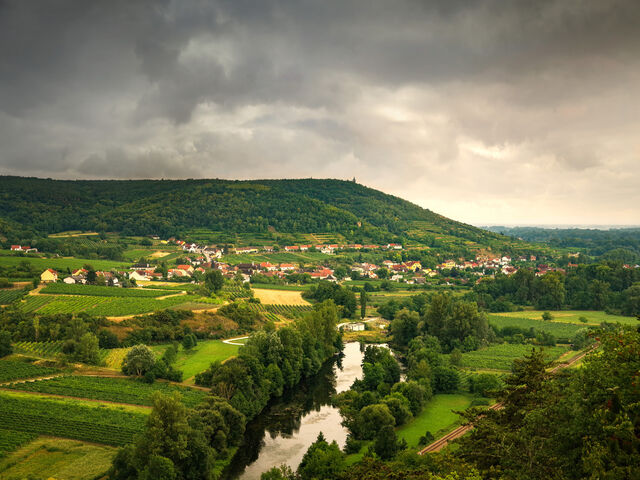 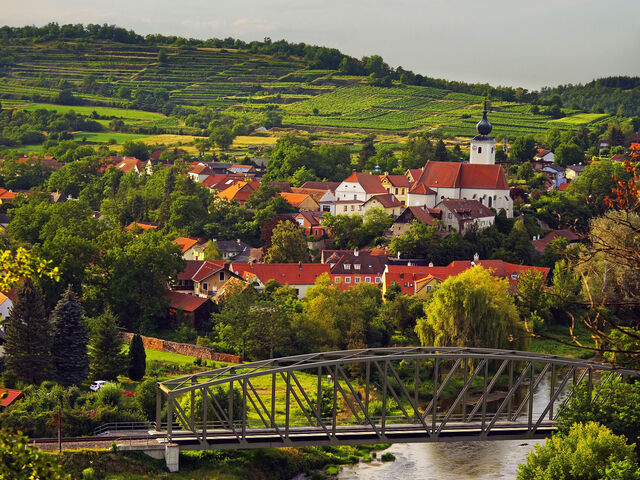 The south-facing winegrowing region comprises geologically expressed rock of the Variscan orogeny and the Molasse basin. The Molasse basin shows evidence of development from a body of water known to geologists as the Paratethys Sea to a river landscape, shaped by the overlapping influences of the three river systems Kamp, Traisen and Danube.

In the north, diverse and predominantly acidic crystalline rock similar to that of the Wachau and Kremstal dominate. Sunk into a wedge within it from the Heiligenstein towards the northeast, an ensemble of stone unique in Austria comes to light: in this tectonic trench, the initial erosive remains of the erstwhile high mountains of the Bohemian Massif can be found. They consist of conglomerates, sandstones, arkoses (red, feldspar-rich sandstones) and shale clays formed about 320 to 250 million years ago, mostly in a dry-hot climatic period as flash-flood sediments from the old mountains poured down into the foothills. As a special feature in the conglomerate, rhyolite rubble can be found, bearing witness to volcanic eruptions.

In the Kamptal as well, glacial-period loess is the stone and soil with the largest distribution in the vineyards.

The concentrated structure of Kamptal DAC wines harmonises with a wide range of culinary styles and dishes. A Kamptal DAC tastes best with baked or grilled fish and seafood, but also with traditional dishes such as roast chicken or baked meats. The Reserve category will also stand up to the savoury recipes of various ethnic cuisines, but also feel quite at home in creative gourmet preparations.