The 2,368 hectares of vineyards in the Kremstal – the Krems river valley – are divided into three distinct zones: the historic city of Krems, whose western districts called “Stein” borders directly on the Wachau, then the actual Krems valley with its mighty loess ridges to the east, and finally the little wine villages south of the Danube clustered around the monumental Göttweig Abbey. Since 2007, Kremstal DAC stands for spicy Grüner Veltliner and elegant, mineral-driven Rieslings, which in addition to the refreshing, classic-to-middleweight styles, are released to the market as robust Reserve-category wines.

In the old (viti-)cultural city of Krems, references to wine are everywhere to be seen: historic granges offer testimony to its great winemaking tradition, which has been handily brought into the modern era by young winegrowers, an innovative cooperative winery and a modern viticultural school.

Geologically related to the westerly adjacent Wachau, soils of weathered primordial rock that are ideal for Riesling prevail in the urban precincts and the surrounding area. The vineyards to the east of the city are quite different. Here vast loess terraces, such as those in the wine villages Rohrendorf and Gedersdorf, not only give the landscape a very special charm, but also shape a somewhat rounder, full-bodied style of Grüner Veltliner. South of the Danube one finds the municipalities of Furth, Palt, Krustetten, Hollenburg, Oberfucha and Tiefenfucha, watched over by the Benedictine Order’s magisterial Göttweig Abbey, founded in 1072 and visible far and wide. In this part of the winegrowing region, many small traditional wine taverns contribute to preserving the quaint and down-home character of the Kremstal.

Like the neighbouring winegrowing regions Wachau and Kamptal, the Kremstal finds itself in an area of climatic confluence and tension. The finely-chiselled river valley is well protected against the cool winds from the north, while the warm air currents of the Pannonian climate zone from the east make themselves keenly felt. Thus, the Kremstal – although situated further west than the Kamptal – benefits from warmer air currents, rendering its wines rather ripe and aromatic in general.

Soil and climate together create excellent conditions for juicy, finesseful white wines, especially those vinified from Grüner Veltliner and Riesling. These form the basis for Kremstal DAC – on the levels of Gebietswein (regional wine), Ortswein (“villages” wine) and Riedenwein (single-vineyard wine), and also as a Reserve-category variant, one can clearly taste their origins. Many famous single vineyard sites such as Pfaffenberg, Kögl, Wachtberg, Sandgrube, Pellingen, Gebling, Spiegel and Steinbühel produce distinctively characterful wines.

Weissburgunder and elegant, expressive reds make up a pleasant minority in the Kremstal, both released under the designation of origin “Niederösterreich”. This classic winegrowing region on the Danube River also has much to offer in terms of wine tourism and fine dining. 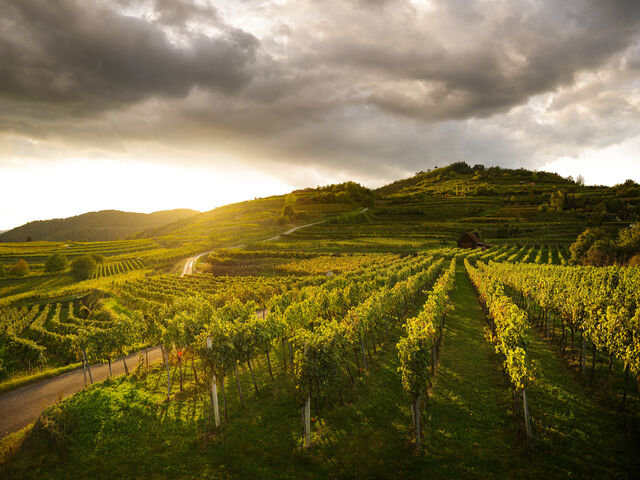 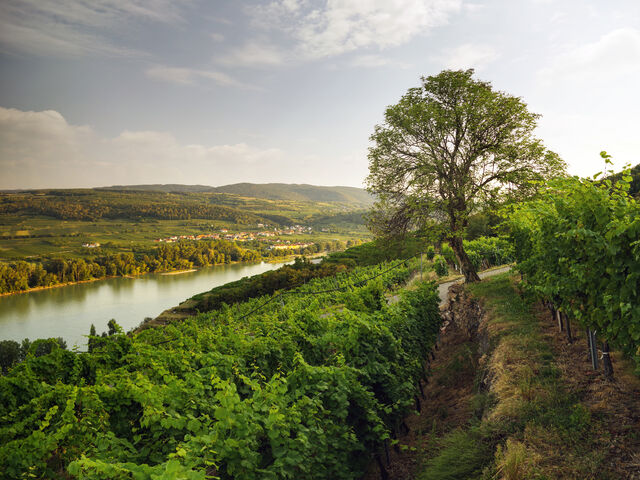 The winegrowing region Kremstal lies on the southeastern arc of the Waldviertel and the Dunkelsteinerwald, formed from crystalline solid rock, and it opens to the east in the Alpine foothills with predominantly loose rock. This position on the downwind side of the crystalline highlands is responsible for widespread and sometimes very deep deposits of loess.

The loose rock in the region is primarily carbonate in nature, lying in several strata one above the other. It can be found overlaying the crystalline rock and all the older gravel, sands and clays of the Molasse basin sediments that were deposited partly by the primordial sea and partly by rivers, as well as spreading itself atop the Danube terraces. Only the lowest, level vineyard sites close to the gravelly flood plains of the Danube have no loess covering, only a skin of fine inundative sediments.

The highly nuanced structure of the Kremstal DAC wines facilitates perfect combinations with a wide variety of dishes, from classic roast pork to spring rolls, where Grüner Veltliner in the Reserve category plays its role perfectly as a brilliant universalist. Kremstal Rieslings, on the other hand, are in their ideal element as companions to traditional fish dishes, as well as to flights of finned culinary fancy.