The Leitha Range is home to the all-rounders. Hardly any other winegrowing region hosts such diversely varied forms of wine as do these 2,878 hectares on the western banks of Lake Neusiedl. Leithaberg DAC wines can be both red and white, and will always display the minerality, dynamic tension and vitality typical of the region.

Leithaberg is one of the oldest winegrowing regions in the world, on the Burgenland side of the Leitha Range west of Lake Neusiedl, with 2,878 hectares under vines. Discoveries of grape seeds as grave-goods in a Celtic burial mound from the Hallstatt Culture in Zagersdorf dating back to the 8th century BCE provide some of the oldest evidence of viticulture in Central Europe. Characteristic for this locale are the vineyards sloping down toward Lake Neusiedl, embraced by countless almond, cherry and peach trees.

The dry wines all carry the signature of the soils on the slope of the Leitha Range, where acidic, crystalline schist and gneiss appear between limestone-rich strata again and again. This fossil limestone – around 15 million years old – brings a slightly salty note and an element of elegance to the wines, while the schist imparts the desired dynamic tension and backbone. Climatically, Lake Neusiedl brings important ripeness to the wines with its warm winds, while the mountains lend nocturnal coolness and thus fruitiness, freshness, finesse and vivacity.

The regionally typical wines here are marketed under the designation “ Leithaberg DAC ”. White Leithaberg DAC may be produced from the varieties Weissburgunder, Chardonnay, Neuburger or Grüner Veltliner, as well as cuvées composed of these varieties. Red Leithaberg is vinified from Blaufränkisch. The reds are matured in cask, but any woody note should remain discreetly in the background and support the character, the elegance and tension of the wine, while not claiming any undue attention. White or red Leithaberg DAC is always mineral-driven and relatively robust in character (stated alcohol on the label 12.5%, 13% or 13.5% vol.). In addition, in the area west of Lake Neusiedl a wide range of other varieties and styles appear, which are customarily marketed under the designation of origin “Burgenland”.

The region, with its many excellent wine estates, is also a top destination for wine tourism. (Wine) culture as a supporting program is offered, among the many attractions, by the state capital Eisenstadt, with its famous Esterházy Palace, Mörbisch with the lake festivals, Sankt Margarethen with its music festival in the ancient Roman quarry, or the Austrian Wine Academy in Rust. 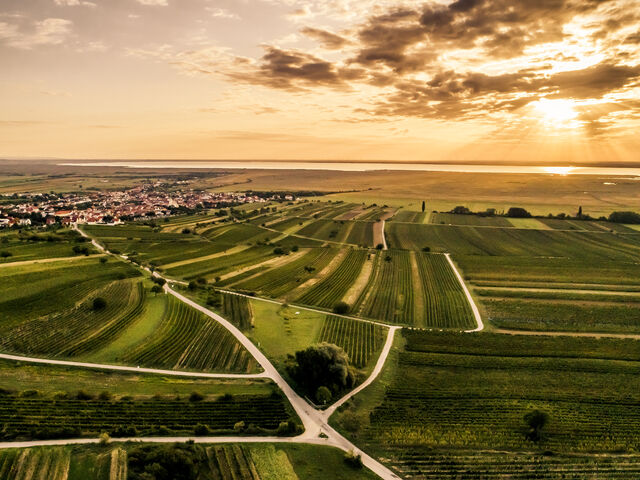 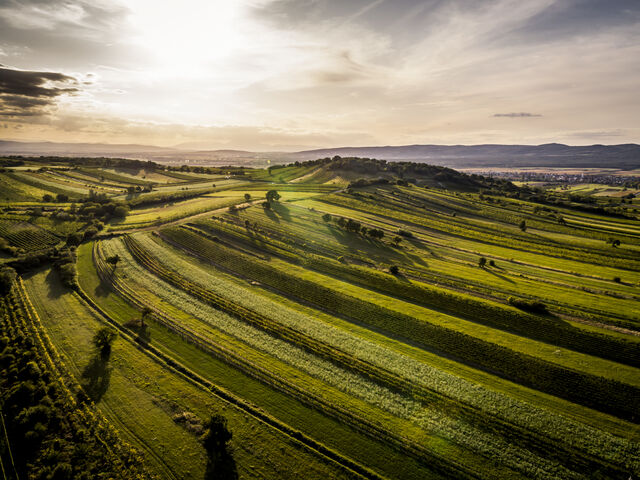 Encompasses the political district Eisenstadt and vicinity, the free cities Eisenstadt and Rust, the communities Jois and Winden, as well as some vineyards in the municipality Neusiedl am See.

Labelling: Designation of origin (including ‘DAC’) must be stated on the front label (if there is no back label).

The oldest forms of rock here are the acidic schist and gneiss of the Eastern Alpine unit, which form the central part of the Leitha Range and support the highest-elevations vineyards between Breitenbrunn and Donnerskirchen, as well as individual sites around Eisenstadt and Oslip. The most noteworthy rock in the region, however, is the Leitha limestone. This distinctive stone was created in the calm shallow waters of the warm sea, which lapped at the edges of the Leitha Range some 11–16 million years ago and provided space for the formation of small reefs. Leitha limestone is a solid and bright algae limestone rich in remnants of marine creatures such as bivalves, snails and sharks. In contrast, the quartz-rich, sandy gravel one finds in the hills of Rust is somewhat older. Separated by a tectonic displacement from the Leitha limestones, here one finds two very different parent rocks for both acidic and calcareous vineyard soils right next to each other.

In the lower elevations, the vineyards are planted on loose, mostly calcareous silt, sands and gravels of the Pannonian Basin, as well as on loam, lacustrine clay and gritty alluvial deposits.

White Leithaberg is an extremely versatile dining companion, a congenial partner to fish and poultry dishes that feature a touch of the savoury – paprika, for example. With asparagus as well, one finds many very elegant regional ambassadors with a bit of bottle age to be marvellously complementary. The mineral character of the red Leithaberg DAC asks for pan-seared steaks, venison fillets or ragouts, rack of lamb or a pink duck breast.